Want to experience, first hand, the culture and heritage of Moray?

The diverse range of events held annually in Moray put you at the heart of it.

Take part in one of the adrenaline pumping Highland Games, immerse yourself in the music and crafts, or expand your sensory experience with locally produced food and whisky against the backdrop of unrivalled scenery 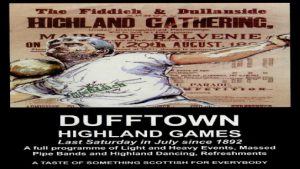 Held normally in late July or early August, Celtic culture is celebrated in music, crafts and song in a four day festival.

Now an annual fixture on the Scottish music scene, the Speyfest festival hosts performers from home and abroad, in covered marquees, in the village of Fochabers.

Held at Seafield Park, the Keith Country Show is a major event for the local farming community. It attracts, in particular, entries from horses, cattle and sheep.

Held in early August, the event dates back to 1872 and is the only agricultural show held in Moray.

Scottish traditional music and song is celebrated in a three day festival in June. It includes concerts and ceilidhs that are held by Hotels and local halls during the event.

It would be no exaggeration to describe the Spirit Of Speyside Whisky Festival as a pilgrimage.

The festival has a worldwide base of whisky enthusiasts that attend a packed programme of whisky themed events over several days in May.

Whisky tastings and theme dinners are just one small part of an event that introduces the visitor to the spirit of Moray; both the whisky and its people.

Preserving Moray culture is of great importance to the communities of Moray – and it’s what the Highland Games do best.

Forres, Dufftown, Tomintoul and Aberlour stage their annual Games in the summer. They feature a mixture traditional competitions and track and field.

Music and dancing feature heavily as part of the Games which, combined with the competitive element, provides an opportunity to enjoy a major attraction set against the backdrop of Moray scenery.

Shot Put, Tossing the Caber and the Hammer are just some of the traditional events held in May within the castle grounds.

Children’s entertainment, trade stands and country pursuits, are well represented in an action packed programme at the Gordon Castle Highland and Country Fair.

The best of Moray produce is presented in this festival for foodies.

Elgin Food & Drink Festival is held in August and includes cooking demonstrations and tastings. The food experience is complimented by the hand made gifts and crafts offered at the craft market and the wide range of entertainment and activities that ensure that there is something for everybody.