The world famous Malt Whisky Trail is just one of the many opportunities, that Tour 3 provides, to capture the spirit of Moray Speyside.

The River Spey runs through the heart of the region. The waters of the Spey are clear and fast-flowing. That makes it one of Scotland’s finest angling destinations.

A large proportion of Speyside is completely wild. It provides a home for a vast and diverse variety of wildlife which cannot be found anywhere else in Britain.

If you enjoy walking and cycling, there is an endless choice of varied routes. From woodland and river walks to more strenuous climbing. 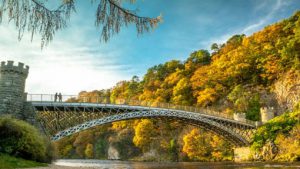 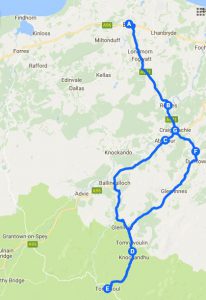 The Kirk at Birnie is one of the few examples of surviving Norman architecture in a parish church in Scotland. It was the seat of the first four Bishops of Moray from 1107-1184 before the seat was permanently moved to Elgin.

The site has been used for worship long before the current 12th century building was erected. It was probably the site of an early Celtic church dating back to the 6th century.

A rounded Norman arch stands at the entrance to the chancel. Below the south window of the chancel there is caged enclosure which houses an ancient bell. It is thought that the bell, which is made of silver and copper, was blessed, personally, by the Pope.

A Pictish carved stone stands by the gate leading to the graveyard. Although weathered, the traditional Pictish symbols of an eagle, notched rectangle and z-rod can still be seen.

One of the area’s most popular beauty spots, Millbuies Country Park is a good outdoor environment for the whole family.

A variety of trees surround the many paths that lead to picturesque and scenic views. The main path circumnavigates the loch that is stocked with rainbow trout.

Red squirrels, rabbit and roe deer are just some of the wildlife that can be observed in the park. Alongside the swans and moorhen that glide across the loch.

The car park and toilets are complemented by picnic tables, and a barbeque and play area.

Inhabited as far back as 600 AD, the Rothes street plan forms a Saltire in honour of St. Andrew.

The pagoda rooftops and charcoal stained bonded warehouses of the 4 distilleries are evidence of its position at the heart of the world famous Malt Whisky Trail and Speyside.

The Glen Grant Distillery provides a perfect setting to sample the “water of life” for which the region is famous.

Situated at the north end of Rothes, the distillery has an excellent visitor centre and 22 acres of gardens and glen. They can be accessed via a landscaped woodland path from the car park.

At the south end of the village lies the remains of Rothes Castle. Built on a hill by Peter de Pollok about 1200 AD to command traffic up and down this stretch of Speyside. Overlooking the High Street, the massive outer wall is the only fragment of the once magnificent castle that remains.

The pack horse bridge can be found where the Lour burn is crossed by the High Street. Built before 1624, it leads to an ivy covered gable wall in the cemetery which was once part of the old Kirk of St. Drostan (Skirdustan).

Aberlour A’bunadh is a well known single cask whisky produced by the Aberlour Distillery. The distillery is situated near the bridge and is open to visitors.

The Parish Church sits on the side of the square nearest the River Spey. It was built to replace St Drostan’s Church as part of the new town development in 1812.

The other end of Aberlour is home to a different, but equally famous industry. Walkers Shortbread is the largest independent biscuit maker in the UK, and produces 60% of all the shortbread exported from Scotland. Exporting to over 40 countries, it is also the UK’s largest biscuit exporter.

Known as ‘The Pearl of the North’ Ballindalloch Castle has been the home of the Macpherson-Grants since the 16th century. Today it is one of the finest surviving examples of a classic Scottish baronial castle.

Extended and altered in 1845, the Z-plan tower house is an impressive tower pierced by small windows and shot-holes.

Extensions to the castle were made in the 18th and 19th century and include the lower wing.

Excellent fishing is provided by the Rivers Avon and Spey that run through the estate. The cattle that graze here belong to the oldest Aberdeen Angus herd in the world.

Generations of families since 1784 have maintained the traditions of spinning and weaving in the oldest operating rural mill in Scotland.

The Victorian machinery at the Knockando Mill is still in use today and the unique sounds and smell of cloth being woven provides a unique visitor experience.

Drumin Castle stands on a rocky bluff overlooking the confluence of the River Livet and the River Avon and protected by them on its north eastern and north western sides.

In 1372, Alexander Stewart was granted the land by his father King Robert II.

Drumin Castle was probably built in 1376 and stands in an ideal defensive location which may have been fortified as far back as the Iron Age.

On 17th June 1390, Alexander Stewart destroyed Elgin Cathedral and much of the town. An act which was in keeping with his reputation as the Wolf of Badenoch.

The Packhorse Bridge is thought to have been built at the same time as nearby Blairfindy Castle.

Hundreds of years old, it’s the oldest surviving structure to cross the River Livet. It helped the transportation of whisky by early bootleggers.

In 1829, The Muckle Spate swept away one of the arches. The two surviving arches do, however, give a sense of the original structure.

A small car park off the B9008 provides access to the bridge, however, the bridge is unstable and so can no longer be crossed.

An underground structure dating from the late Bronze Age (1200 BC), the site is an ancient listed monument.

Whilst the origin of Knock Earth House is uncertain, it is an underground chamber that is stone lined and may have been a souterrain or “earth house”.

At a height of 354m, Tomintoul is the highest village in the Highlands.

The village remains relatively remote with nothing, to the south west, more developed than the odd track for nearly 40 miles .

The 4th Duke of Gordon built the village in 1776 to house a number of dispersed settlements on his estate. The new village offered improved housing and also made it easier to tackle whisky smuggling and cattle reiving.

The town is an ideal place from which to explore the Glenlivet Estate (a key part of the Malt Whisky Trail) and the north eastern Cairngorms.

Bike and walking trails are within easy access on the estate which covers more than 100 miles.

A feature on the Scots Road Scenic Route, ‘The Still’ is a box-like structure that forms a viewpoint just outside Tomintoul.

The installation has two open ends and the landscape is reflected on the mirrored interior walls.

One of the most innovative snowsport centres in Scotland, the Lecht is small but perfectly formed.

When conditions allow, freestylers can access a skills park. Slalom poles and timing are available for sport skiers on the race piste.

A skills park and 2 downhill mountain trails for Mountain Bikes provide activities in the summer.

One of the most significant sites of historical interest in Moray.

After the Reformation of 1560 the Catholic Church almost died out in Scotland.

To avoid persecution, a college for priests was established in 1716. A remote spot at the foot of the Ladder Hills in the Braes of Glenlivet, was chosen for the college.

It was the only place in Scotland, for much of the 18th century, where young men could be trained to be priests.

At the foot of the Conval Hills and on the banks of the River Fiddich, Dufftown is at the heart of Speyside.

The roads in to and through Dufftown intersect at the square with its distinctive clock tower.

Dufftown is home to the Glenfiddich Distillery, the central point for the Malt Whisky Trail and founders of the Spirit Of Speyside whisky festival. It produces more whisky than any other town in Scotland.

The Dufftown Highland Games are held on the last Saturday in July and offer a taste of something Scottish for everybody.

The games offer a full programme of Light and Heavy Events, Massed Pipe Bands, Highland Dancing, Hill Races, fun for the entire family and much more.

Just beyond Glenfiddich Distillery on the road to Craigellachie is the old Dufftown Railway Station.

The Keith and Dufftown Railway runs seasonal services for the 45 minute trip to Keith.

Two miles south of Dufftown is Auchindoun. In the 15th century a tower house was constructed, as part of Auchindoun Castle, on the site of an Iron Age hill fort.

Founded in 566 AD by St Moulag, the Kirk is one of the oldest Christian settlements in Scotland.

Whilst much of what can be seen today dates to the 12th century, the earliest parts of the church date to the 8th century.

Pictish stones are depicted on one of the stained glass windows and the image of a beast is carved in the Pictish stone in the vestibule.

To guard against body-snatchers a watch-house was positioned in the graveyard.

The Battle Stone, a late Pictish symbol stone, can be found in the lower graveyard.

Mortlach itself is the site where in 1010 King Malcolm II defeated a huge force of Vikings on the hill opposite the kirk.

A 13th century fortress, Balvenie Castle can be found immediately north of the town centre of Dufftown.

Built by the 4th Earl of Atholl, a three storey 16th century tower house stands within a high curtain wall.

A projecting round tower flanks the entrance, which still has its original yett.

Whilst the upper floors are ruined, it is still possible to see the great hall with a pointed vault and the massive vaulted cellar and bakery on the ground floor.

The site commands the mouths of Glen Rinnes and Glen Fiddich along with routes to Huntly, Keith, Cullen and Elgin and was strategically significant.

The name means “rocky hill” and the village dates back to at least 1750.

The village is located on a cliff above the River Spey and the site of a ferry across the Spey.

The Craigellachie Distillery can be found in the village and the Macallan Distillery is situated on the other side of the River Spey.

The Easter Elchies estate is home to the new Macallan Distillery and visitor centre and the architecture is both contemporary and striking.

The buildings are cut in to the slope of the land, which has been classified as an ‘Area of Great Landscape Value’ minimising the visual impact on the Speyside landscape.

The Speyside Cooperage is just outside Craigellachie on the Dufftown road.

The cooperage repairs and builds over 100,000 barrels a year and is a key element of the whisky distilling industry.

The iconic Craigellachie Bridge is one of Moray’s most photographed structures and is one of the finest examples of Thomas Telford’s work.

Opened in 1814, it carried traffic over the River Spey until the early 1970s when a new road bridge was built downstream.

The bridge was revolutionary for its time, has a single 150ft span, and is the only surviving iron bridge in Scotland.