Relatively undiscovered, Tour 4 offers glorious views of the Moray Firth along a dramatic coastal route before it heads back inland to the witness the industrial heritage and agricultural roots of Keith and Moray.

The coastline and settlements of this part of Moray form part of the Moray Coastal Trail.

Discover a spectacular coastline alive with wildlife and fishing villages that seem to cling precariously to it. Enjoy a sense of wilderness amongst the huge bays, sea stacks and coastal formations whilst never being far from the attractive coastal villages and civilisation. 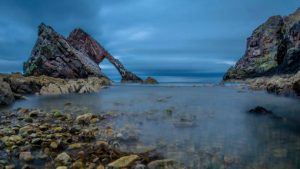 To the south of the square, and in close proximity to an impressive fountain, is a fine Georgian church complete with its clock-tower dated 1798.

A celebration of the best in traditional and contemporary Celtic music is captured at the annual Speyfest. The festival is held over 3 days at the end of July on the Fochabers playing fields and draws a worldwide audience.

Baxters, a family-run company specialising in soup and preserves, has been operating in Fochabers since 1868. The Baxters Highland Village comes complete with an excellent visitor centre and restaurant.

The family of Gordon is an ancient clan whose lineage dates back to the reign of King Robert the Bruce in the 14th Century. Records show that Sir Adam Gordon was present at the Battle of Inverury in 1308 and fought alongside Robert the Bruce. George, Second Earl of Huntly first established a castle on the Estate in 1279.

In the late 18th Century the castle was transformed into a grand baronial mansion by Alexander, 4th Duke of Gordon. The result was stark contrast to the original fortress and a Scottish Versailles in design.

Evidence of a walled garden at Gordon Castle can be traced to the 17th century.  The Walled Garden, in its present form, dates back to 1803 and would have supplied the castle with vegetables, fruit and herbs.

The Inventory of Gardens and Designed Landscapes in Scotland judged the Walled Garden as a work of art and an outstanding garden of national significance.

Spey Bay is a coastal reserve. The wet woodland, coastal grassland, the largest shingle beach in Scotland and saltmarsh habitats have been shaped and created by the constant changing River Spey.

The origins of Spey Bay can be linked to the salmon fishing on the Spey.

The Tugnet icehouse is all that remains of the original fishing station and is the largest surviving icehouse in Scotland. Home to the Whale and Dolphin Conservation Society, it is a tourist attraction that offers exhibitions and a land-based whale and dolphin watching facility for all the family.

The heritage, wildlife and scenic outdoors offered by this unique part of Moray is celebrated at the annual Really Wild Festival in May.

On first sight, it’s difficult to imagine that there was a significant port dating back to the 16th century at Garmouth with a shipbuilding industry based at neighbouring Kingston village.

The random street pattern of attractive cottages and houses provides a welcome contrast to the planned settlements in Moray.

The Buckie that greets the visitor today was shaped by the Gordon family of Cluny in the late 18th century. Impressive Victorian architecture is evident within the town and laid out along a ridge above and behind the original fishing villages.

One such impressive building is St Peter’s church that can be seen for miles along the coastline.

Originally built in 1857 to be a cathedral of the Roman Catholic Church it never achieved the intended status. It remains a twin-spire gothic masterpiece and one of the most magnificent churches in the North East of Scotland.

The harbour dates back to 1877 and, despite the decline in the Scottish fishing fleets, remains one of the most active in Scotland with an active shipyard.

Portknockie is a small cliff top fishing village with a history dating back to 1677. Its harbour today is a marina for private boats and hints to the fact that it was once a major fishing port in the 19th century.

One of the most photographed natural formations in Moray, the Bow Fiddle Rock can be viewed by walking west towards the coastline. The unique ‘bow shaped’ formation is complemented by the dolphins and seabirds that frequent the same waters.

Boasting an historic pier and harbour designed by Thomas Telford and a railway viaduct that provides stunning backdrop to its Bay, the Royal Burgh of Cullen is a popular tourist destination.

Whilst the rise of the herring industry in the 19th century was largely responsible for the growth and wealth of the town, its main claim to fame today is a smoked haddock, onion and potato soup – Cullen Skink.

A Burgh of Barony in its early history and an important centre for the cattle trade in the 8th century, Keith is an agricultural town on the River Isla. An important business centre, the town now consists of 3 communities, Keith, Fife Keith and Newmill.

Black cattle and horses were sold at the annual Great Simmareve Fair in mid-September. The fair attracted manufacturers and traders from Glasgow and merchants from the Highlands and Islands. The Fair was eventually replaced by the Keith Country Show.

Though farming methods today are somewhat different than those of our fore fathers, the Keith Country Show today still holds true to its agricultural roots.

This can be seen by the variety of exhibitions, demonstrations and traders available within the showground.

Whilst historically, the cattle trade and the farming of barley, oats and flax created wealth fuelled by a local industry dominated by agriculture, the banks of the River Isla also formed the focus for a more enduring industry for Keith: distilling.

There are four distilleries in Keith or in its immediate area and by far its best know is Strathisla and it is also, by far, the most picturesque distillery in Scotland.

The Stratisla distillery is also the oldest legally operating distillery in the Highlands, having been in operation since 1786.

Textiles were also an important source of wealth. The ‘Cottage Industry’ of spinning and weaving gave way to a more structured method of large-scale woollen mills. The Isla Bank Mills to the north of the town were a centre for the tweed industry from the 1850s until the 1990s and are now home to a successful business park.

At the Keith Kilt School, students are taught the art of kilt making and the Scottish Tartans Museum is the only one of its kind.

The Roman Catholic Chapel has two colossal figures of St. Peter and St. Paul surmounting the pediment, and an alter piece presented by Charles X of France.

Near the churchyard of Fife Keith is the Gaun Pot, or Pool in which witches were drowned.

With its agriculture, distilleries and many specialised manufacturers that formed its industrial heritage, coupled with hill and nature walks on its doorstep, Keith lends itself to service industries and tourism.

Manage Cookie Consent
To provide the best experiences, we use technologies like cookies to store and/or access device information. Consenting to these technologies will allow us to process data such as browsing behaviour or unique IDs on this site. Not consenting or withdrawing consent, may adversely affect certain features and functions.
Manage options Manage services Manage vendors Read more about these purposes
View preferences
{title} {title} {title}